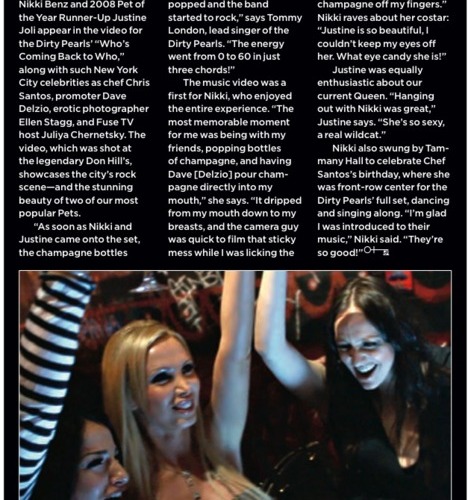 I used to write a column for Penthouse called “Pet Projects.” In addition to writing about whatever the girls were working on out in LA, I’d write about all the parties and shindigs I went to with the girls here in New York. That’s actually how I got the column. I spent enough time going out with Justine Joli that it became part of my job. (And my mother said partying was a waste of time. Ha!)

I’d been a fan of the Pearls for a few years, since I saw them open for Jesse Malin at the Bowery Ballroom. They’re classic rock-and-rollers, and their music is definitely my style. So when I found out two of my favorite ladies had shot a video with them, I was psyched to be able to get them into my favorite magazine (that’d be Penthouse, in case you couldn’t guess). Even though they’re an indie band, they’re hugely popular — even outside of NYC — and can count Lady Gaga among their biggest fans. I knew they’d be perfect for our readers.

In addition to having two sexy Pets in their video, The Dirty Pearls had Justine host their video release concert at the Bowery Ballroom in June (which was after we went to press, so I didn’t get to include it in the article). Justine gave the crowd a thrill, joking with them and even flashing them, before the band took over and rocked the house. Then the crowd took over my friend Dave’s club, Tammany Hall (@TammanyHallNY), for a raucous after-party. Again Justine did her part to give the rock-and-roll fans a good time, giving out porn and sex toys and taking photos with everyone. It was quite the night.

To read the column I wrote about The Dirty Pearls’ video shoot, “Rock Babes,” which ran in the September 2011 issue of Penthouse, click here.

I wrote about Nikki Benz and her work for Penthouse in my old column, “Pet Projects.” You can now read it online by clicking this here link: Contract Player

Cinemax show “Life on Top” is based on a series of books, which are based on the lives of very real Penthouse Pets. Find out about the Pets who filmed the first season of the show. And look for season two starting in 2011.

Three of my favorite Penthouse Pets—-Taylor Vixen, Ryan Keely and Veronica Ricci—-competed for 2010 Pet of the Year on The Howard Stern Show. Hot naked ladies singing, dancing and answering trivia questions. Read it.